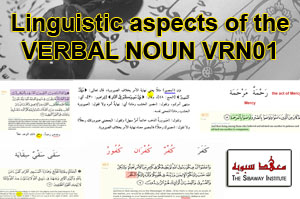 We will delve into the linguistic aspects related to the verbal noun ( Masdar). We will discuss the patterns of verbal nouns and extra meanings associated with them. We will examine the Masdar Meemee and compare it with the normal Masdar. There will be many examples from the Quran and other linguistic discussions. We will see other usages of the Masdar such as the absolute object.

Students can register and enrol in this course at any time. The course material can be download for future reference. The student will also have access to online teachers as well as extra lessons when they become available.
COURSE LESSONS

Lesson 1 - The reasons why more than one verbal noun can exist for a particular root. There will be a discussion on the Quranic usage of different Masdars from the same root. [21:40 minutes]

Lesson  2 - Extra meanings associated with the Masdar patterns. We will look at a number of examples in the Quran. [19:15 minutes]

Lesson 3 - The difference between the Masdar and Masdar Meemee. Examples of their usage in the Quran. [18:28 minutes]

Lesson  5 - Linguistic aspects related to the Absolute Object ( Maf'ool Mutlaq). 2 different forms of emphasis: emphasis of the verb and emphasis of a sentence. Examples from the Quran. [18:46 minutes]

This is an ongoing series that will answer all student questions.