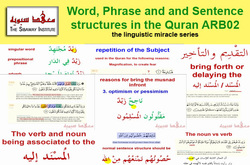 We will delve into the structures of a Nominal and Verbal sentences and will demonstrate how changing word positions and/or structures will affect the meaning. We will look at bringing forth and delaying different aspects of a sentence including the subject, predicate, doer,object prepositional phrase, adverb and we will give numerous examples in and outside the Quran.

Lesson 1 - The verb and noun being associated to the musnad ilayhi. Examples from the Quran. [17:10 minutes]

Lesson 2 - The bringing forth or delaying of the musnad and musnad ilayhi [19:18 minutes]


Lesson 3 - The bringing forth or delaying of the musnad and musnad ilayhi Part 2 [21:20 minutes]


Lesson 6 - The bringing forth or delaying of the adverb and prepositional phrase [19:24 minutes]


Lesson 7 - The linguistic aspects related to the musnad and musnad ilayhi both being definite [29:16 minutes]


Lesson 8 - The linguistic aspects related to repetition of the subject, using a masdar for a khabar and mentioning multiple khabars [32:10 minutes]


Lesson 9 - The linguistic aspects related to the object [22:21 minutes]