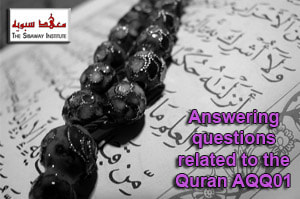 A major problem that exist in understanding the Quran are translations of Quranic texts which are unable to capture the vast meanings of the Quranic discourse. Along with this is the complexity of classical Arabic which many students are unaware of. This module will answer the many questions asked by students of the Quran and will give them new insights into the beauty and eloquence of the Quran. This course will highlight the undeniable fact that the eloquence of the Qur’an is unprecedented and unmatched.

Question 1 - Regarding the attributes of Allah (Most High) at the end of certain ayaat, what is the difference between mentioning these attributes alone, with the particle Inna, with the weak verb Kana or with both Inna and Kana. [9:46 minutes]

Question  2 - Difference between سَمَآء and سَمَوَات. Analysis of 2:29. سَمَآء used as either a masculine and feminine noun. The many meanings of the word سَمَآء. Detailed explanation of the creation of the universe mentioned in 21:30 and 41:11-12. Comparison of 3:133 and 57:21.[32:29 minutes]

Question 3 - Why was the name of the father of Ibrahim Alahyisalam mentioned in 6:74 ? Why do some scholars say that he was not his real father? [6:06 minutes]

Question 6 - In Surat Al Israa Ayah 78, it mentions the word Dulook, some translations say that it means declining and some say it means setting. What is its real meaning? Why are there only 3 times frames mentioned in the Quran thus giving support to the Shia view of joining prayers during the 3 time frames? [9:54 minutes]

Question 7 - In 66:5 it mentions a number of attributes of righteous women. One of the attributes mentioned  is traveling and I don't know the significance of why this attribute was mentioned. Also, the last 2 attributes mentioned are "previously married" and "virgins" and obviously it would need to be the one or the other since they are opposites, so why was this mentioned ? [6:10 minutes]

Question 8 - The rhetorical aspects related to ( وَهُوَ عَلَىٰ كُلِّ شَيْءٍ قَدِيرٌ) , " And He is capable over all things" [12:15 minutes]

Question 9 - I was reading an Iraab of the ayah 7:155 and the translation it uses is "from his people" yet the harf jaar min is not present. How does one justify the translation and why was the min omitted? [5:18 minutes]

Question 11 - One of the signs of an Ism is that it can be invoked using a particle of invocation such as Yaa. Why then in 36:26 is a verb being invoked? [4:44 minutes]

Question 12 - In Surat Al Baqarah Ayah 138, it uses the term Sibghata Allah. I have seen translations like  "the coloring of Allah". Can you please explain this? [7:34 minutes]

Question 14 - In Surat Al mudathir it mentions a similitude of donkeys running away from a lion. What is the significance of using this similitude? Why was the word Humur (donkeys) and Qaswara (lion) used in the Ayah? [6:54 minutes]

Question 18 - Who is Al-Samiri who is mentioned in Surat Taha? (Includes others points related to the story of Musa AS and Bani Israel crossing the sea.) [20:03 minutes]

Question 21 - A brief response regarding evolution. Does the Quran speak about it ?  [5:35 minutes]

Question 23 - Does the Quran mention who the actual Pharaoh of Egypt was at the time of Musa AS? [15:17 minutes]