ACQ : Answering Criticisms of the Quran 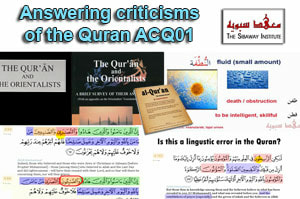 A major problem that exist in understanding the Quran are translations of Quranic texts which are unable to capture the vast meanings of the Quranic discourse. Along with this is the complexity of classical Arabic which many students are unaware of. This module will answer the many questions asked by students of the Quran and will give them new insights into the beauty and eloquence of the Quran. This course will highlight the undeniable fact that the eloquence of the Qur’an is unprecedented and unmatched.
Criticisms Answered

Lesson 1 - Precision in the verse endings. How context dictates verse endings. Word positioning reversed in verses to reflect the context. contrast between 20:70 and 26:48. removal of a pronoun to fit the rhyme scheme but also to give a precise meaning. examples of similar verses with different endings to match the context. [23:33 minutes]

Lesson  2 - Answering Orientalist claims that the Quran is inconsistent and has no structure. We will look at 2 examples from Surat Al Muzzammil (73) and Surat Al Nisa (4). [16:52 minutes]

Lesson 5 - Brief discussion on ambiguity in the Quran. To whom do the singular pronouns in ayah 48:9 refer to, Allah or the Prophet? [12:37 minutes]

Lesson 6 - In Surat Al-Naazi'aat 79:30 some Muslims are claiming that the earth is egg shaped. Does it say this and if so why do none of the classical tafsirs say this?  [6:34 minutes]

A response to an Ex-Muslim regarding Ayah 16:106
STUDY OPTIONS